Jeff has so far been mostly working on lore and background for races as they are developed, with the intent of ensuring that the Remnants universe is populated with unique races with interesting motivations. The next alpha, however, is going to feature a bit of his work, particularly with “Introductions” for each race and race-specific dialogue. The lore and backstory for each race will be part of a separate game manual at some point — it’s not so appropriate to deliver in-game.

The point of the race Introduction at the start of the game is to immerse the player (you) within the mindset of your selected race. Why your race acts the way they do and why they have certain racial advantages may make more sense. Of course, players can easily skip the introduction if they want, but it will be there for those who like it.

Kaitlin Lindsay, who will be illustrating the game manual, did a mockup of this intro screen for me. Honestly, having talented artists on the project raises the whole thing to an artistic level I could never hope to attain without them. Jeff’s intro text for the Alkari is below. Obviously, the “Alkari Story Title” is TBD. I can’t even do that on my own.  herp derp. 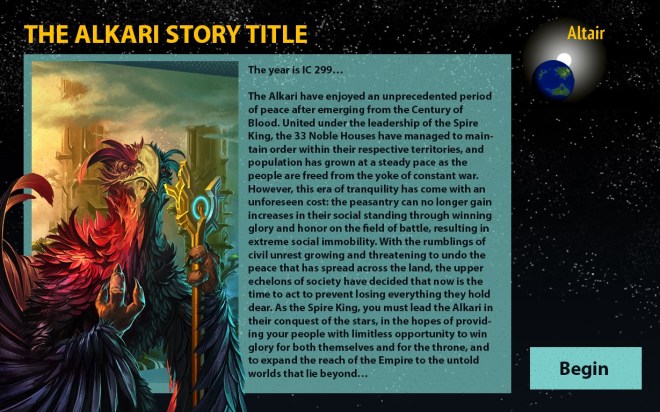 What he calls a “rough initial draft” is already an order of magnitude better than anything I would have written on my best day!  That’s why he’s the writer and I’m the programmer. 🙂

Jeff will be creating something similar for each of the races before starting on the race-specific dialogue.

Check out this image:

In MOO1, the Darloks were “shape-shifters”, but definitely had a non-corporeal vibe to them. This is probably because they were originally patterned after the Nazgul in Lord of the Rings.

In MOO2, Darloks became strictly biological and developed a less-mysterious look which they have retained through the latest MOO (althoughwith far superior artwork in MOO4). To the right is the MOO2 version of Darloks.

In all versions of MOO, the Darloks are master spies and considered very secretive. Anyway, Remnants is a MOO1 clone and will return the Darloks to their non-corporeal status.

The current plan is to cast the Darloks as refugees from a parallel dimension, escaping to ours and forming a new “homeworld” at Nazin. They are very secretive about their extra-dimensional nature and origin. Perhaps they fear being ostracized as aliens in the truest sense of the word, or perhaps the other races will learn about and open portals to their dimension. Obviously, Jeff (the writer) will flesh this out in very interesting ways.

Either way, it has to be more interesting than the standard one-dimensional caricature of the “dark shadowy Darloks”.

Originally, the next alpha was going to include ship combat, 2-3 more races and some other additional artwork. Unfortunately, all of the artwork for that would place the alpha at sometime in the fall of 2017, which seemed too far away.

I realize that this project is going to take a long time to finish because it is basically being pipelined through a handful of people (developer, artist & writer), each working on separate tasks.

However, there is a tremendous amount of value in public alphas with respect to user feedback so I don’t want to go too long between them. As a result, I think I am going to break the next alpha into two, smaller alphas. So, the current plan for the next alpha is below.  I’m hoping this can all be done about 4-6  months sooner, by March of 2017.

Definitely in (things to be done sooner rather than later):

Possibly In (because of low artwork requirements):

Definitely deferred until later (will take too long for a timely alpha):

I haven’t  been posting a lot lately but work is still going on. I just thought I’d share this cool gif of the Silicoid transport ship.

Here’s a brief video detailing some of the user experience improvements in the Remnants UI:

The Sakkra artwork has been integrated into the game. Here is a video showing it and contrasting it to the MOO1 original: